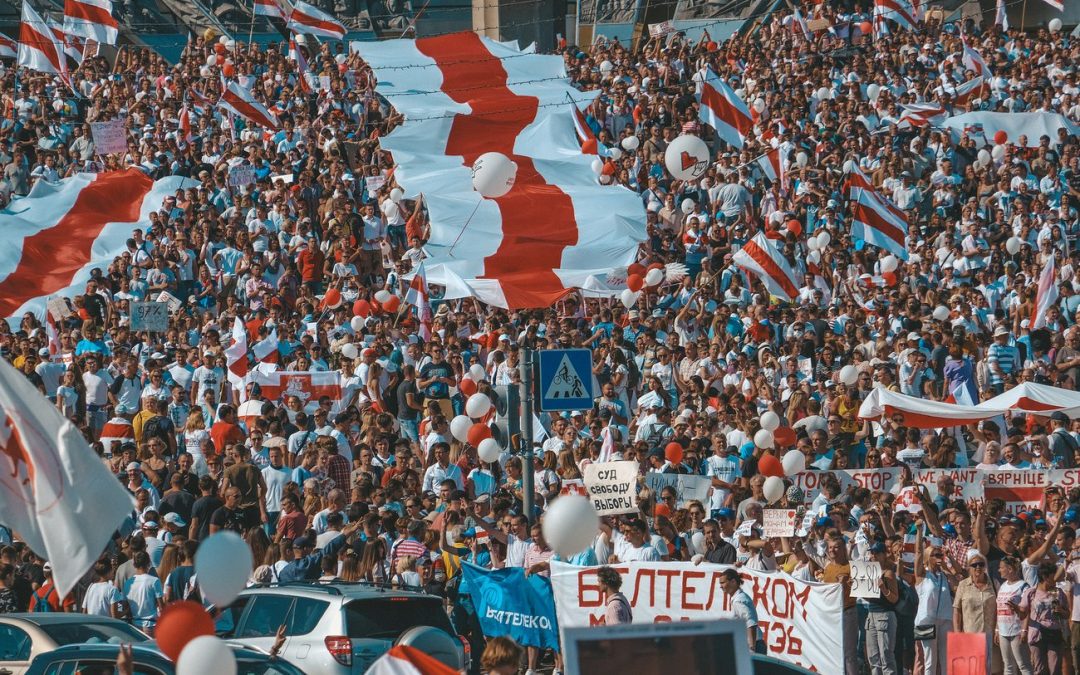 In August 2020, many of us were watching closely the presidential elections in Belarus, hoping for change. Our hopes were shattered on 9 August, when the official election results were announced. Aleksandr Lukashenko, who has been in power since 1994, was declared the winner again. Many in Belarus believe the president massively falsified the vote to ensure a landslide victory. People say the opposition candidate Svetlana Tikhanovskaya was the real winner. She was forced to leave the country after the election results prompted nationwide protests. People were calling for the president to step down and authorities responded with unprecedented crackdown. Reportedly, at least two people have been killed, hundreds injured, and thousands detained in the first few days of the protest.

Soon thousands of workers joined the protests demanding an end to police violence and new elections. Many workers and trade union leaders were detained and severely beaten. Democratic countries refused to recognise the election results and condemned the violence against protesters. But businesses headquartered in these countries remained silent.

To prompt a reaction from the corporate sector, Belarusian activists reached out to a large number of Western companies engaged with the Belarus Government urging them to take immediate action. In their letters to companies, activists argued the profits of the companies’ state-owned business partners in Belarus “…go directly to the Belarusian government that channels these funds to brutally suppress peaceful demonstrations limit free speech, and falsify elections.” Despite this direct link, most companies remained silent.

On behalf of the activists, Business & Human Rights Resource Centre followed up with 43 companies asking them to respond to the concerns raised by the Belarusian activists. Only fifteen companies have responded so far. Some said they were concerned, others promised to investigate the situation on the ground, and one company quoted the Roman emperor Vespasian saying “Money doesn’t stink”. Does it not indeed? A closer look at what workers and trade union members are going through in Belarus suggests otherwise, as they battle violence, arrest and even imprisonment for simply trying to exercise their very basic rights, including freedom of expression, freedom of assembly, freedom of association and the right to a fair trial, among others.

Daria Polyakova, a youth network coordinator of the Belarusian Radio and Electronic Industry Workers’ Union, was sentenced to two years of house arrest for “violence or threat of violence against an employee of the Internal Affairs Agency”. She allegedly tore a police officer’s jacket when trying to prevent him from arresting her colleague. Daria is a widow and mother of two children. Zinaida Mikhnyuk, acting president of the Belarusian Radio and Electronic Industry Workers’ Union, was arrested during a peaceful protest in Brest. She is accused of “participating in an unauthorized mass event”. If convicted, she can be sentenced to six years in prison. Three employees of the government-owned Byelorussian Steel Works (BMZ) were found guilty of “breaching public order” during a strike organized at the factory. They have been sentenced to two and a half and three years in prison. The scale of persecution is terrifying. Since the beginning of the protest action over 30,000 Belarusians have been taken into police custody.

While most companies still keep silent, some have spoken out and taken welcome action. Yara, a major customer of a potash producer Belaruskali, investigated alleged workers’ rights violations at the factory. Company representatives visited Belarus in September and December to meet with the factory management, workers and independent trade union members. As a result of the dialogue, Belaruskali promised to reinstate workers fired for an attempt to organize a strike. In another example, Nivea Men, Škoda Auto and Liqui Moly said they will not sponsor the 2021 International Ice Hockey Federation (IIHF) Ice Hockey World Championship if it takes place in Belarus. Liqui Moly’s statement on Instagram reads: “…The current situation in Belarus as well as the politics of the government, the treatment of demonstrators and obvious violations of human rights in Belarus deeply contradict Liqui Moly’s convictions and values. For this reason, Liqui Moly will cancel its sponsoring of the ice hockey world championship if the IIHF committee hold on to the decision to let take place the competitions in Belarus.” On 18 January, the IIHF announced its decision to move its 2021 Ice Hockey World Championship from Minsk “due to safety and security issues”.

In light of the ongoing threat to human rights, we will continue to urge companies to take action. Put simply, company inaction threatens not just the human rights of workers, but the wider population of Belarus.